Projects that other groups/translators may (and are encouraged to) take. Mostly done because I was intrigued by something. No guarantee of continuing. These will also only be First Pass translations (no proofing, editing, or finalizing, just one re-read).

Mushamusha…muimui. [is the actual synopsis]
Muimui-tan is a nice, laid-back reincarnation, skill acquiring story about someone reincarnated as a giant caterpillar-like creature called a Dire Crawler, and his adventures in the world.

Goblin no Oukoku (The Goblin Kingdom):
There is an ugly creature known as a Goblin, a race that exists only to be hunted by people. However, there lives are about to turn around with the birth of a single king. The story of a king who commands monsters to rise up against the gods. A tale of him and those monsters and humans that supported him. (Aka, what if in Re:Monster, Rou wasn’t super OP, stayed a little ugly goblin, and actually used strategic knowledge to take over the world).
–Chapter 1
-Picked up by NeoTranslations

Synopsis:
In a world where a variety of peoples live, Elves and Beastmen, even Fairies, there are those that are hated――Mixed Breeds. Acht, a girl with memories and knowledge of a past life on another world, is such a hated creature. Avoided where she walks, unable to stay at an Inn, and no potential places of employment in her future. A life with a mountain of problems, she tries to overcome it with the knowledge from her former life, but when she does… A research loving Royal Magician, a black-hearted Prince, even a Pirate Captain; a bunch of troublesome people begin to call her a “Sage” and follow her everywhere! A reincarnation fantasy about a pessimistic girl and her misfortunes.

Picked up by a few different groups 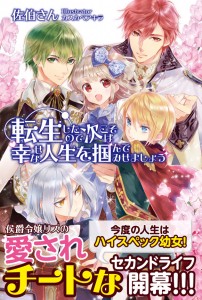 Tensei Shitanode Tsugi Koso wa Shiawasena Jinsei wo Tsukande Misemashou
I Reincarnated, so the Next Thing to do is Lead a Happy Life
(Happy Life)

Synopsis:
After being hit by a car, she suddenly found herself in the afterlife…or so she thought, but for some reason she reincarnated as a baby in another world?! Lizbeth was raised by incredibly doting and beautiful parents, and using the knowledge from her former life she makes a goal to “have a moderately successful life” in this world. However, her talent for magic is abnormal, and a prince, along with many other noble young men have either become infatuated with her, aim to kill her, or almost die…that isn’t “moderate” at all! But even so, she swears to obtain the happy life she envisioned, somehow!

Watashi, Dokidoki Renai Kakumei de Onii-chan Yattemasu
I, am Playing the Role of the Older Brother in Hearthrob Love Revolution
(LoveRevoBro)
(aka OMG HaruPARTY is translating a non-reincarnation novel!)

Synopsis:
I’m very ordinary girl who had no interest in Otome games, and was suddenly sucked into the world of a cliche Otome game, Heartthrob Love Revolution. That’s all well and good, I’m not exactly thrilled, but it’s fine. However, why am I the heroine’s older brother? I’m a girl! My character is named Makoto, and as him I hang out with the Heroine to help her get together with the princely character and make it to the end credits. All righty, I just need to support the Heroine while she does her best. If I do, I think I’ll be able to go back to my original world…but wait, why am I so popular? Hey, prince guy, don’t you blush at me!

Chapter 1-2
Picked up by Nakimushi

Nice,, lets see where this goes.

this has alot of potential. the writing style is solid so far, hope it becomes more than a teaser

I love the premise of this, I also hope it doesn’t stay a teaser 🙂

Would you like to take ·Yomigaeri No Maou· as a proyect? 🙂 Its a really interesting and great story but Oniichanyamete isnt interested in translating it for a reason I dont know why and I think its such a shame for the people to not be able to read a really nice story :D!, Hope you see this comment.. Well then~~ 😉

Agreed Yomigaeri No Maou is a good one.

Thanks for the teasers. I really like Happy Life. Will you take it up as a main project?

All the teaser is so good! Hope some one would pick them up.

I very like the teasers. I hope someone can translate them more.

hi, i heard that you have translated 2 chapters of ‘fairytale for villains’? may i know what happened to it??? fyi, im super duper interested in it and am now looking for translators who are willing to translate it… do you perhaps know any? >.<

Still in the editing process, but we’re getting there! It’s been low priority compared to our other already released projects. But worry not, still working on it! You can see our current progress in the handy dandy Project Progress Chart linked in our menu!

oohh, okay thank you so so so muchh!! i was worried that someone would not pick it up, hehe.. much thanks, solistia!!